Reason number 13434562.4 why I don’t eat squid or octopus, and be it any animal that is still alive on my dinner plate….

While a woman was dining in Korea, she took a bite of the partially cooked squid upon her plate. Apparently, the squid had other plans than being consumed.

And lo and behold, the cephalopod still alive with their natural animal instincts to fulfill their biological mission in life (TO REPRODUCE!) injected the woman’s tongue with his sperm packets.

The woman reportedly experienced a “pricking and foreign-body sensation” while chewing the squid and spat it out back onto her plate. Can you imagine?! UGH. She eventually went to the hospital because she became enthralled with severe pain and claimed that several “small, squirming” creepy crawlies were in her mouth.

The doctor found 12 small white spindle-shaped, bug-like sperm packets injected into the woman’s tongue and cheek. I found a good photograph online showing what squid sperm packets look like up close..feast your eyes! 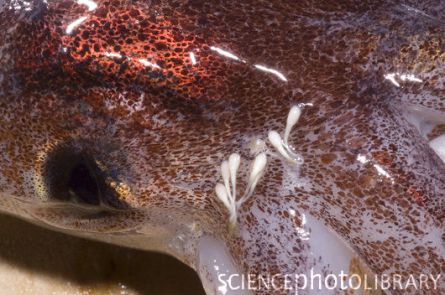 Moral of the story, if you DO eat raw squid (shame on you..sorry it’s the Marine Scientist and cephalopod lover in me) then you should remove their internal organs, or boil them long enough to kill its sperm bags. Or let them be free and reproduce naturally with their own species 🙂

ON a totally different note, my friend Rachel who writes the blog LoveFitLife asked me to be a guest blogger! I have never guest blogged for another blogger before, so of course I was super excited and definitely all in!

Please check it out my guest blog post here :

Do It, Review It: Chanel Hason on Run.Yoga.Give.