Well, when you think you’ve seen it all, a story like this comes along!

In the Ionian Sea, researchers conducting the Ionian Dolphin Project were out watching a pod of friendly dolphins. And when one jumped out of the water, they saw something peculiar dangling from the underside of the cetacean.

After the researchers came back and examined the photos more closely, they saw that the peculiar object was none other than an octopus hitching a joyride on the dolphin! Well, it may have not been the best joyride because the dolphin was most likely jumping out of the water so much to dislodge the poor little octopus from its body. A scary joyride if you ask me.

Unfortunately for the dolphin, the octopus seemed to be lodged into its genital slit. Awkward…

Who knows how or why this happened-  maybe the dolphin tried to eat the octopus and the octopus was doing this for payback? Or the octopus just wanted to experience what it was like to swim with dolphins? Maybe the octopus is having an identity (and species) crisis? We will never know. Let’s just be happy that we wear bathing suits (at least most of us) when we are swimming in that big blue! I definitely don’t want an octopus to find a place to become lodged anywhere on my body (too much?..oops). Hahah! 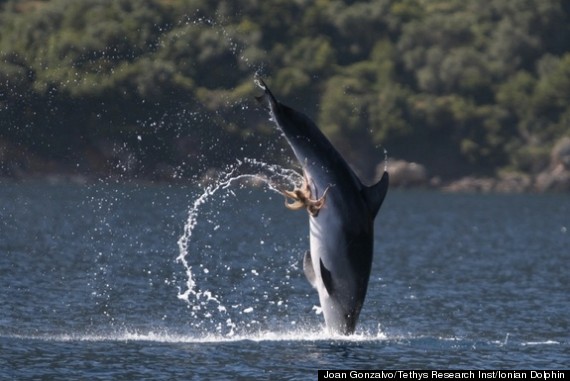